This is a text widget, which allows you to add text or HTML to your sidebar. You can use them to display text, links, images, HTML, or a combination of these. Edit them in the Widget section of the Customizer.
Posted on March 7, 2018 by futurespastsite

It had to be Christmas. Well, maybe to a lesser extent, birthdays, but Christmas is the one I remember best. I had two aunts, a grade-school teacher on my father’s side and a high school librarian on my mother’s side, whose gifts to me were almost always books.

But what books! My librarian aunt, worried that I read too many comic books (the Kefauver Committee in Congress had left a lasting presence that they led to juvenile delinquency), began foisting school library books on me, like the Hardy Boys, Tom Swift, the Lone Ranger…

An older cousin of mine had given me a couple of the Lone Ranger novels after he was through with them, and they fascinated me. I don’t think I had even become aware of the long-running radio show yet when I read them. Fran Striker wrote them, the same guy who scripted three Lone Ranger radio shows a week, not to mention radio scripts for the Green Hornet and Sgt. Preston of the Yukon. (His son would later write a book about him, appropriately titled His Typewriter Wore Spurs). {See blog post “Remembering the Lone Ranger” for more than you ever wanted to know on that topic.}

The same aunt also pushed me onto a book called Pebble in the Sky, knowing I liked science fictional comics, the first novel by some writer named Isaac Asimov. She also found one called David Starr, Space Ranger, by somebody named “Paul French,” who I would later learn was also Asimov. Asimov went on to write literally hundreds of books of all kinds, and I would become a lifelong fan.

I don’t know which aunt discovered and started gifting me with the Winston series of SF for young readers, but they were fabulous. Science fiction writers who would become famous (Arthur C. Clarke, Raymond F. Jones, Poul Anderson, Lester del Rey) or who already were wrote original novels for this series, some of which later became paperbacks for adult consumption. The only thing that made them what would now be called “young adult” books was that they featured younger protagonists than most “adult” SF.

The John C. Winston Co. apparently decided to publish SF for young readers after the success of Robert A. Heinlein’s Rocket Ship Galileo (1947; the inspiration three years later for George Pal’s first SF movie, Destination: Moon). It started the line in 1952, and published 37 of them over the next nine years, the last two years as Holt, Rinehart & Winston. The publisher’s initial announcement about the project billed the books as “for all ages.” Obviously, they were, given that some found future re-publication as adult paperbacks.

The interior front and back endpaper illustration in all of them showed a robot that I thought looked like the one in The Day the Earth Stood Still, which I had already seen. It showed practically every other imaginable SF scenario as well. Artist Alex Schomburg outdid himself. 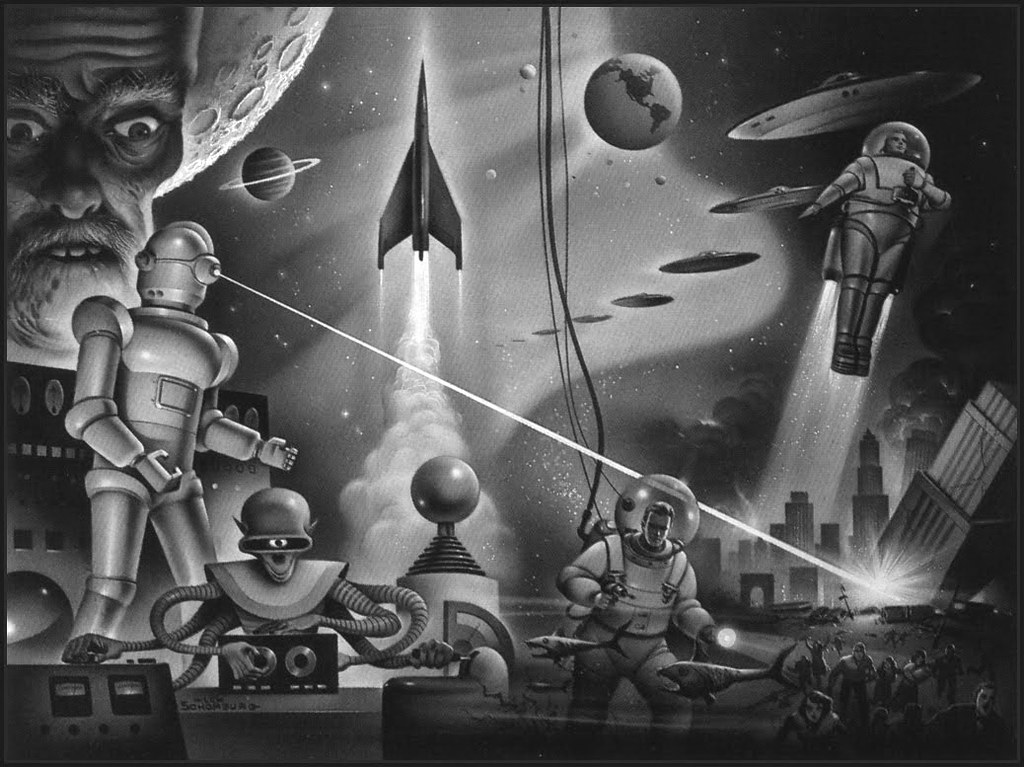 My main gift might have been a pair of Hubley cap pistols (usually with those white plastic longhorn steer handles), or a cowboy suit, or a Captain Video board game. But it was the books I would end up with later in the morning, still sleepy from trying to stay awake all night in anticipation of the gift-giving. I would start reading one of them, under the illusion that I might actually finish it before dropping off for a morning nap. That never happened, naturally, but I still fondly remember happily cocooning myself with one of those books on Christmas morning and reading away.

It would be years later that I would complete my collections of Lone Ranger hardbacks and the Winston books, although some of those had to be the later “adult” paperback reprints because the originals could be expensive. Others apparently enjoyed collecting them, too.

I will still pull one out occasionally and re-read it. They helped start me reading in genres that have brought enjoyment and enlightenment to me all my life. I’ve even done some writing in them myself (see https://www.amazon.com/s/ref=nb_sb_noss_1?url=search-alias%3Daps&field-keywords=paul+dellinger if you’re curious). They may never have realized it, but those gifts from my aunts were for a lifetime.

2 thoughts on “The Reading That Got Me Started”