This is a text widget, which allows you to add text or HTML to your sidebar. You can use them to display text, links, images, HTML, or a combination of these. Edit them in the Widget section of the Customizer.
Posted on May 21, 2018 by futurespastsite

I have a dim memory of first encountering the Cisco Kid in the person of Gilbert Roland, during a weekend double feature at my hometown B-western theater where I spent many happy hours. I’ve never been able to identify the particular movie. But, today, I do know a lot more about the Cisco Kid.

The radio show billed him as “O. Henry’s famous Robin Hood of the West,” and that’s partly true: O. Henry did create him. But he was no Robin Hood. He wasn’t even Mexican.

The Cisco Kid in O. Henry’s 1907 short story, “The Caballero’s Way,” was an Anglo outlaw based largely on Billy the Kid. This is how ruthless he was: When he finds that his girlfriend has fallen for a Texas Ranger and agreed to set a trap for him, he arranges that she falls into the trap instead and is gunned down by her lawman lover. Cisco rides away, free of conscience.

The story was adapted into a 1914 silent movie, lost to posterity. It is not even known who played that first Cisco. The earliest version we can still see is In Old Arizona (1928), in which the character becomes Mexican (and will remain so from then on) and is also given a nicer persona, although he is still a cheerfully-unrepentant outlaw. Warner Baxter, who played Cisco, won the Oscar for Best Actor. The movie (although there may have been times when microphones could be spotted sticking out of the cactus and such) also got nominations for Best Picture, Best Director and Best Sound. (He serenades his senorita. Does that make Cisco the first singing cowboy? 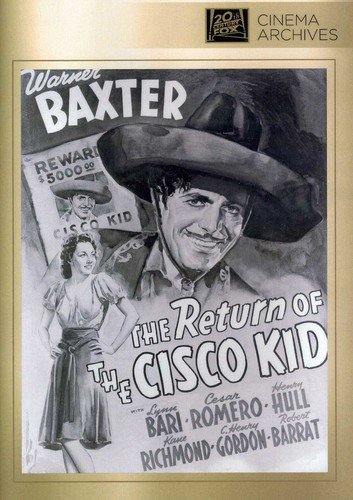 Baxter repeated his role in The Cisco Kid (1931) and Return of the Cisco Kid (1939). There was no Pancho character, although there was a fat sidekick named Gordito. Caesar Romero played another sidekick in the 1939 movie.

And then Romero himself became the Cisco Kid, which may have momentarily confused audiences, in six more movie quickies made between 1939 and 1941, when the series came to an end—for a time. Chris-Pin Martin continued as Gordito.

Monogram Pictures revived the series in 1945, with The Cisco Kid Returns, and with a new Cisco, Duncan Renaldo. The character of Pancho was also introduced, played by Martin Garralaga, but the duo only lasted through three pictures, all made in 1945.

Gilbert Roland took over the role for six more films released from 1945 to 1947, and returned the character to the drinking, womanizing and slightly shady bandit that was closer to the Warner Baxter original. Martin Garralaga appeared in several of them, but not as Pancho. In fact, Pancho didn’t show up until Roland’s last two Cisco films, when he was played by Chris-Pin Martin, who before had been Gordito. Long-time audience may have been confused again.

To confuse them farther, Duncan Renaldo returned to the role in The Valiant Hombre (1948), teamed for the first time with Leo Carrillo as Pancho. They made five films altogether as Cisco and Pancho, into 1950.

The pair then made 157 half-hour Cisco Kid television episodes, continuing into 1956. Carrillo, whose film career went back farther than the first Cisco sound movie, was 75 years old when the series ended. Even though most TV sets were still black and white when the series was first shown, it was the first TV series to be filmed in color, giving it a long life in syndication.

Meanwhile, the character was busy in other media. He came to radio on Oct. 2, 1941, and lasted until 1945. He started again in 1946 with new actors playing Cisco and Pancho, in more than 600 episodes lasting into 1956. That was where the announcer introduced him as “O. Henry’s famous Robin Hood of the west, the Cisco Kid.”

There was one more TV-movie version, simply titled The Cisco Kid (1994), with Jimmy Smits and Cheech Martin in the roles. Smits plays Cisco as being from Los Angeles rather than Mexico (an American, just like O. Henry’s version), and Martin played a politically-correct Pancho, a revolutionary rather than a comic sidekick. It didn’t revive the character, but it did have some funny lines, and made up an origin story about how Cisco and Pancho met.

Contemporary authors have swiped characters like Cisco and the Lone Ranger for stories of their own, here and there. But Cisco was more a media character than a literary one. Thanks to those color TV episodes and occasional Encore Western TV channel movies (not to mention the advent of movies on DVDs), he’s still riding across screens today–one of our more durable pop culture icons.